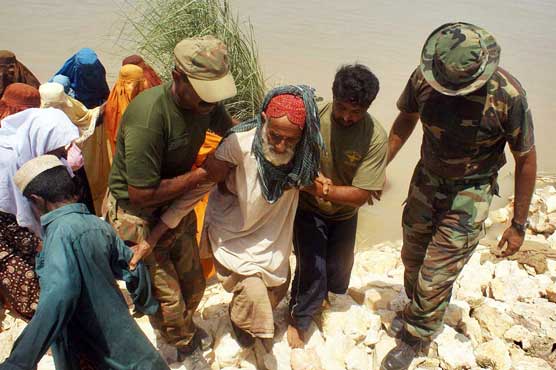 Pakistan Army has announced to donate its 2 days ration for flood victims.

Army formations will distribute rations to the victims. On the other hand, Pakistan Air Force is actively participating in relief activities in the flood-affected areas of Balochistan. During the operations.


PAF helicopters delivered more than 16,995 pounds of relief goods to flood-affected areas. That had been cut off from land connectivity due to heavy rains and recent floods.

Pakistan Air Force personnel are working tirelessly to provide humanitarian aid to the flood-affected areas. It has been directe to provide all possible assistance for the relief activities in the flood affecte areas of Balochistan.

On reaching the Qila Saifullah area of ​​Balochistan, he expressed his anger over the situation of the flood victims’ camp and directed Chief Minister Balochistan Abdul Qudous Bizenjo to take action against those responsible.

On this occasion, the Prime Minister expresse his anger on the concerne officers. And said that nothing is wrong. Only the paperwork is not being done.


The victims are taking immediate action on the instructions of the Prime Minister, DC, Tehsildar and Camp PDM. AK officers. Responsible. has been suspende.

And a warning has been give that there are no reports of personnel from any camp or affected area. Aid should take care of itself. Suspended.

Snapchat scams: How to Spot a Fake Snapchat Account from a Real One

Why to Go for a Walk Daily

3 ways to say goodbye to your Acne this summer